Humans in one corner, dinosaurs in the other; time is of the essence as only 1 side will emerge victorious in fast paced combat where the smallest action can tip the balance in your favor, or lead to your doom. This is 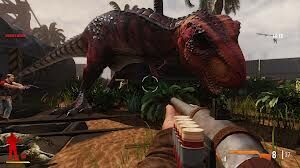 Primal Carnage Team Deathmatch, where players must work together to survive.

Humans must watch each other's backs and keep a keen lookout as death and danger could spring from around any corner, leap from any bush or drop out of the skies without a moment's notice. Keep your weapons loaded and your eyes open and you may just stand a chance at survival in this harsh and unforgiving place. 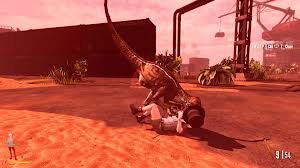 Dinosaurs have a much different problem to face, GUNS. As fearsome and vicious as even the most voracious Tyrannosaurus is, even they can be brought down under a hailstorm of lead from concentrated weapons fire. Dinosaurs must use cunning, deception, distraction, and teamwork to outwit their human adversaries and exploit their weaknesses to emerge victorious.

Team Deathmatch will launch with five large and varied maps (Utility Base, The Docks, Airbase, The Falls, and the Forest Chasm) in which to engage in combat. From the lush jungles deep in the heart of the island to the shores of abandoned dockyards players will fight in different environments, time of day and weather conditions, each presenting new challenges and opportunities to each team, who must adjust their strategies to suit their situation and location.

Community content is available under CC-BY-SA unless otherwise noted.
Advertisement