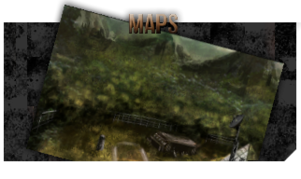 The original game launched with 5 large arenas to fight in, with four new maps being added when Get to the Chopper mode released as free DLC.

Extinction includes all of the maps from the original game, with many layout and aesthetic updates and even alternate versions such as Snowy Forest Chasm.

Additional maps were created for Extinction's new Survival and Capture the Egg modes, with yet more being created by the community. Seven new levels have been accepted through Steam Workshop for inclusion so far.

Get to the Chopper

Capture the Egg mode re-purposes existing levels for the new game mode by dynamically adding new gameplay elements to the map. This is different to GTTC, where areas such as Docks have dedicated versions of the level that are separate from the TDM map itself. This method reduced the time taken to make CTE levels and kept the overall file size for the game's maps from bloating too much.

Levels that can be configured for Capture the Egg currently include: