What's on your mind?

I got some new lore for Ya'll. 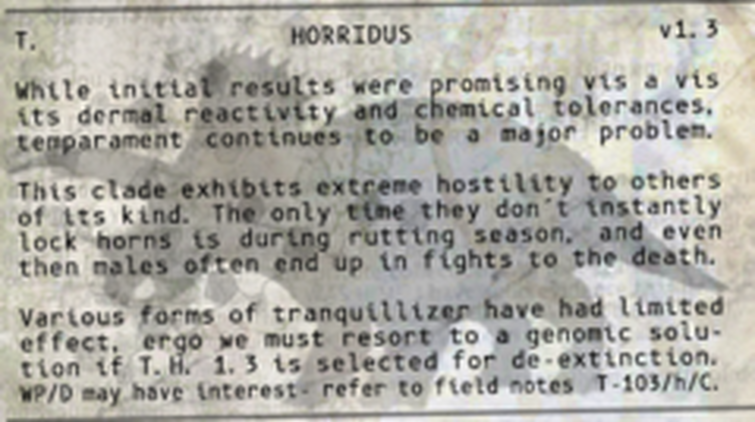 This clade exhibits extreme hostility to others of it's kind. the only time they don't instantly lock horns is during rutting season. And even then males end up in fights to the death

Various forms of tranquillizers have had limited effect. ergo we must resort to

Genomic solution if T. H. 1. 3 is selected for de-extinction WP/D may have interest- refer to field notes T-103/H/C."

So apparently the triceratops will lock horns with each other in an attempt to kill each other unless it's rutting (fancy word for matting) season, this is very interesting in the cause of the lore.

Come on people Pachy has been confirmed already, we just need to make a page on it.

So i've been playing primal carnage extintion for a few years and ceratosaurus is coming out what do you guie sthink?

This is the place to talk about your favorite topic, to share news, theories, ideas, and to connect with others. The content from your Forum has been converted to Discussions posts, so nothing has been lost.

To learn more about what you can do here, check out community.wikia.com/wiki/Help:Discussions

If you're an admin on this community, read more about how you can customize your Discussions and set up guidelines for contributors: community.wikia.com/wiki/Help:Admin_and_Moderator_Tools_in_Discussions

I have been playing as t-rex lately and found that I have been having trouble with the eating people attack. Is there any tips or tricks that would make it easier to eat people.

I love playing as the t-rex, thats why I want to know any tips or tricks.

Duh, hes the king of the jungle!